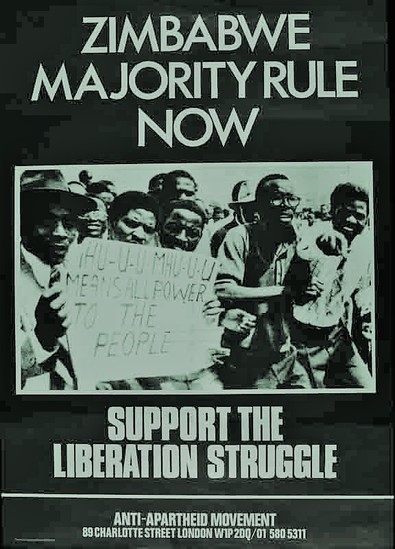 That was our chant at a big demonstration and rally in Trafalgar Square for the liberation of Zimbabwe, sometime in the late seventies.  Yesterday's news about the army takeover there made me look back and wonder.  What had I and my friends thought would come next, after liberation? Disturbingly, as best as I recall, we didn't think much about it at all.   At least nothing much beyond some cartoonish vision of stalwart liberated Zimbabwean farmers on their cooperative farms or communes, hoe in one hand, rifle in the other, reaping bumper harvests on the basis of I don't know what. That's how stupid we were.

About the actual future - the remorseless looting, mismanagement and impoverishment of Zimbabwe over nearly four decades by liberation leader Robert Mugabe and the predatory elites around him - we were fully clueless. This is a country where average per capita incomes are 25% lower than at independence, in 1980. Life expectancy at birth fell to merely 44 years in the early 2000s, and even now, at 60 years, is no higher than in 1980.  Maternal mortality is around 443 per 100,000 live births, unchanged from 1990, and around twice the world average.